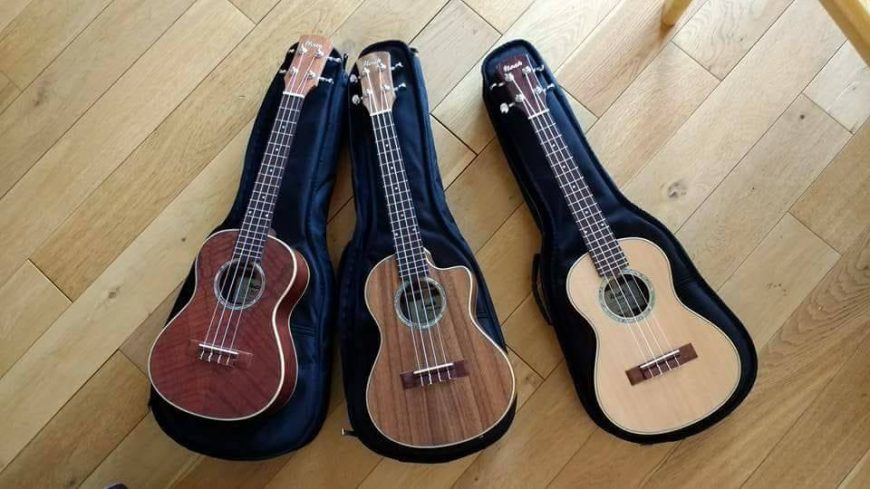 April 1, 2017 by matt In Tenor Ukuleles No Comments

Of the three most common sized ukuleles, the tenor is the largest with a typical scale length of 17 inches (43cm). While traditionally, many players have favoured the smaller concert and soprano sizes, nowadays we are seeing more and more people opt for the larger tenor ukulele. Tenors tend to have a warmer, deeper sound with a greater level of sustain which really lends itself nicely to more intricate playing.

Which Noah Ukuleles tenor should I buy?

I currently have three different types of tenors in the standard Noah range – the Monkeypod, the Mahogany and the Indian Rosewood with Spruce top – and a question I’m often asked is how they compare both in terms of playability and tone. Luckily for me, new Noah Ukuleles endorsee Matt Hicks has recorded a very useful video offering his opinion on the differences between them and also playing the same piece on each of them to give a like-for-like comparison on tone and projection. Here’s a quick summary of his thoughts on each:

“This is an unassuming, stunner. I could see this as a real gig work horse. Exceptional note by note performance and a go-between from the tone of the spruce and the vibrancy of the Mahogany.

” The Mahogany is an absolute monster! Very loud but a great tone too. It’s probably the irresponsible, fast car driving little brother of the three :). It’s incredibly playable.

” It’s a simply stunning instrument. It’s just a lovely all-round sounding uke with a great amount of projection and the tone, sustain and feel on it is just wonderful.

Watch the full video comparison below