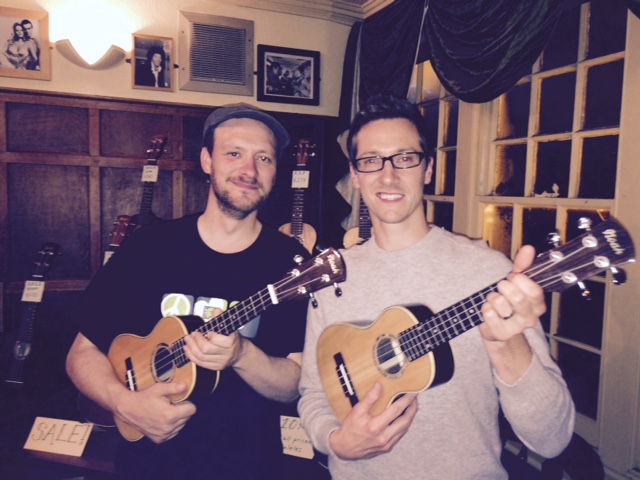 July 7, 2020 by matt In Ben Rouse, Interviews No Comments

One way I’ve been keeping busy throughout these past few months has been interviewing people from the ukulele world here on the Noah Ukuleles blog. It’s been a privilege to feature some very talented performers and find out a bit more about their career and how they came to play the ukulele.

Next up is Ben Rouse, who I met very early on when I started Noah Ukuleles at Southampton Football Stadium where they were attempting a world record gathering of people playing the ukulele. Ben is an incredibly talented musician and I felt very lucky to see him play at close hand regularly at ukulele festivals and clubs during those years. The technique and energy that goes into his playing was always a joy to watch! Since then, Ben has deservedly gone on to bigger things, and is now part of the world famous Ukulele Orchestra of Great Britain.

Here is what Ben had to say:

I know that you started playing guitar from an early age. What got you into the guitar and what kind of music did you listen to growing up?

When I was about 13, my sister got the Extreme album for Christmas as she really liked the song ‘More than words.’ After listening to the album, she was bitterly disappointed to discover the rest of the album was hard rock music so she gave it to me. After I listened to Nuno Bettingcourt’s guitar playing, I knew I had to learn. My grandparents bought me my first guitar and from that moment, I was hooked. I spent hours and hours practicing every day and soon started up my own band.

As for music, I was a massive classic rock and 90’s rock fan, so bands like Deep Purple, Cream, Free, Hendrix, Led Zeppelin, Extreme, Mr Big, Little Angels and Nirvana were all in rotation during my teenage years.

Having then been a guitarist for many years, what then prompted the change to ukulele? And as an experienced musician, what did the uke then give you that the guitar didn’t or had stopped giving you?

I was working in a music shop around 2007 when the Ukulele Orchestra of Great Britain performed on Later with Jules Holland and I was blown away by how they made the ukulele sound and how cool it looked. Rock music on a ukulele was a totally new concept to me.

I asked the manager of the shop to start stocking ukuleles, which they did but they weren’t great ukes (the cheap end of the market but at the time, low end ukes were all we could get). I got myself a sopranro and started to play about on it and researching uke players online. It wasn’t until I stumbled across James Hill that I realised the uke could be played in that way. I put all my spare time and energy into learning classical pieces and playing faster and more complicated arrangements. I started to put myself out into the uke world and slowly started to get uke gigs and before long, I was gigging on the uke more than the guitar.

Although similar skills for both are used, I found it much easier to forget my guitar skills and think of the uke as a completely different instrument and start over. Treating it as something entirely new was much more helpful than trying to transfer my knowledge of guitar chords So, guitar players, forget everything you know and start from the beginning!

Your strumming techniques have always been mightily impressive! How did you develop them and what would you recommend for people who want to improve this aspect of their playing?

I wanted to play like James Hill, so every day for a few years I would just practice my strumming patterns, mainly with no chords; just z chord for hours and hours. It really hurt my fingers on my right hand for a long time but I was convinced it could make me a living, more so than the guitar, so the pain was worth it as it was either succeed at the ukulele or get a “proper job”!

After an album release ‘Solo Ukulele’, a few years working hard on the ukulele touring circuit, putting in some incredible performances at festivals, and delivering quality workshops, you then joined the Ukulele Orchestra of Great Britain in 2014. How did that come about?

I think all the hard work I had put in on the uke circuit must have caught the eye of some of the members of the orchestra and I was asked if I’d like to try out as a stand in for them. I had an email and then a phone call from George asking me if I’d be interested, and of course I was. I was completely blown away to be asked.

After my first try out with them, I did whatever I could to impress them, probably overplaying sometimes in my efforts to show them what I could do.

It has totally changed my life and I still feel extraordinarily lucky to be playing with them.

And what’s it like being a part of such a well respected, world-renowned group?

It’s the best. They’re a wonderful group of people. It’s not very often that a group of musicians can get along so well  but they really do and it’s like I’m part of a big family.

The touring is wonderful; large, grand venues and travelling all over the world. It’s just amazing.

Has it challenged you musically and helped you develop your own playing?

It has absolutely challenged me! I started learning George’s parts and that was really tough. I had to put in so much work to play his parts. George is a musical genius and I still have to practice some tunes every day to be confident enough to play them live. It really pushed me to improve, which is great as you always want to be better than you are as a musician.

What’s been your favourite gig with them?

That’s a hard question to answer as I’ve played so many great venues with them.  One of my favourite gigs has to be playing the Queens private 90th birthday party. It was such a huge honour and meeting the royal family afterwards was something I’ll never forget. It’s certainly something to tell the kids about, even though my oldest son still thinks I photoshopped myself into the photos from that evening.

Other great venues have been the Barbican in London for Kitty’s tribute concert and Dresden Semperoper – wow, that venue is so grand!

What plans have you got going forward in terms of your music, the uke, etc?

At the moment, playing with the Ukulele Orchestra is all I really need musically, I love it and it keeps me on my toes. I’ve not totally stopped solo work but I no longer look for it as I much prefer playing with the Orchestra. I keep meaning to finish some ukulele music books I’ve started and I hope some day to finish them… I suppose lockdown is the time to do it!