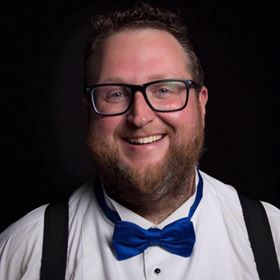 May 5, 2020 by matt In George Bartle, Interviews, Operalele No Comments

To keep myself busy, and hopefully provide a bit of support for musicians during these difficult times, I’m trying to interview various people from the ukulele world and feature them on the Noah Ukuleles blog.

Next, it’s an absolute pleasure to put questions to the wonderful George Bartle. I first met George a good few years ago when he kindly welcomed me to Headcorn Ukulele Group where I pitched up with a car -load of ukuleles to show to the group. Since then, I’ve seen him at numerous ukulele festivals around the UK – I think at one point we might have been having an unofficial battle to see who could attend the most in one year! George is a true multi-instrumentalist, an incredible singer, entertaining audiences with not just his musical performance, but also his witty repartee which I remember well from that time in Headcorn. From memory, I think he might have even helped me get a sale or two that evening! Here’s what George had to say:

Anyone who has been to a Ukulele Festival in the UK in the past few years will know you as one half of the incredible Opera-lele (who we’ll come on to later) – but they might not know much about your impressive musical CV prior to that. Tell us more about that and your love of music growing up.

Haha! Well, I was a chorister in Ely Cathedral Choir from the age of 7, recording a solo CD at the age of 12. After this, I went to the Royal College of Music in London to study voice and trombone, before going to the Schola Cantorum Basiliensis in Switzerland, specialising in music from around 1450-1650.

What was it like to study at such a prestigious college?

It was a fantastic experience. I was constantly surrounded by like-minded musicians, all striving to become the best in the business. The orchestral music world is unbelievably competitive and orchestral jobs come up seldom. I realised, quite soon, that the orchestral routine wasn’t what I was after, so I became a freelance trombonist playing in all the London orchestras and early music ensembles across Europe. For seven years I settled at Shakespeare’s Globe Theatre as one of the Musical Directors performing traveling around the world several times.

So, an impressive musical background, but no sign of a ukulele as yet! When did you pick up your first ukulele and how did it come about?

It was, in fact, whilst on tour with Shakespeare’s Globe that I picked up a ukulele for the first time. I had been asked to play the renaissance guitar and had answered that, yes, I can do that. I quickly set about finding out what a renaissance guitar is and how I learn to play one! A friend of mine who is a lute player suggested I started by learning the ukulele and I could transfer from there. This is exactly what I did and a few months later, I was performing in a show on renaissance guitar!!!

Am I right in thinking that your experiences of performing live extend far beyond these shores? I read somewhere that you’ve toured throughout Russia, China and Taiwan! What was that like and what did audiences make of your act?

I have, indeed, spent lots of time in Russia, China and Taiwan as well as having toured the USA many times. The audiences in Russia were incredible. Very enthusiastic, polite and delighted that we were there. The Chinese audiences are very different to the audiences that we are used to in the UK – very keen to get a selfie or video whole chunks of a show! The Taiwanese people were wonderful and it is such a beautiful country – it is one of the few places I’ve performed in that I am keen to return to!

I mentioned Opera-lele at the start of this interview. You and Mandi have enjoyed huge (and well-deserved) success, even being described by Mary Agnes Krell, GNUF Director, as ‘…truly one of the best ukulele acts in the world’. Tell us how Opera-lele began and why you think your act has been so popular at ukulele festivals.

Opera-lele began because of a couple too many drinks in a pub. Mandi and I met in 2015 at a ukulele open-mic night – we were both performing our own solo sets. Afterwards, in the pub, we realised that we’d both studied as classical singers and the phrase “wouldn’t it be ridiculous to play ukulele and sing opera” came from one of us! The rest, as they say, is history! We performed at our first festival a few months later (GNUF) and were fortunate to be performing on the main stage! No one had heard of us and the audience didn’t know what to expect. We were described as the ‘surprise hit’ of the festival and haven’t looked back really. As long as people still want to hear us, we’ll keep performing!

In addition to performing live, you’ve also put on workshops which, from talking to festival-attendees, people have found really useful and a lot of fun. Do you enjoy teaching and what advice would you give to ukulele players who are looking to progress from beginner to more of an intermediate level?

We love working with groups of musicians and have run many workshops at ukulele festivals and also in schools. We tend to focus on the singing side of things as there are usually many more accomplished players offering ukulele advice, but I think that the best thing we could pass on is “don’t feel that playing the ukulele should limit what you can do. Set your sights high, and shoot for the stars! You never know where you’ll end up!”.

How have you been / are you being affected by the current situation with the Coronavirus? Are you making any plans to livestream gigs, workshops, provide online tuition, during this period of lockdown?

We were looking forward to our busiest year yet! We have had many gigs cancelled as Opera-lele and I have lost lots of other work as well (teaching and performing). We took part in the very recent Wireless Ukulele Festival II on May 1st which was run by Matt & Andy from World of Ukes and have taken on some individual tuition. We are planning some online workshops too, so keep an eye on our website. We have also launched our ‘Singing Greetings Cards’ which involve us singing a song and delivering a personalised message in song to a person of your choice. This is all done via email so no physical cards are sent, making it the perfect unique gift for family and friends! I have also written two books of ukulele duets which are available by emailing me directly – they come with play-a-long backing tracks so you can play with a friend (after the lockdown) or play along with me on the recording. They’re just £7 per book of 12 songs. (magbartle@hotmail.com)

Assuming that at some point, things start getting back to normal again and live music returns, what ambitions do you have for both your solo project Renaissance Uke Man and Opera-lele?

With Opera-lele, we have always said that we’re aiming for world domination!!! We just want to get back on the circuit and doing what we love, which is performing to audiences. Any performer will be struggling at the moment. Not just financially, but as someone who creates, I have limited outlet for this. We need to create and it is, therefore, a dark time for all of us. If you have an opportunity to support someone who is a performer, please do consider doing so. These are uncertain times, but we will come through the other side, stronger and even more full of enthusiasm and determination!