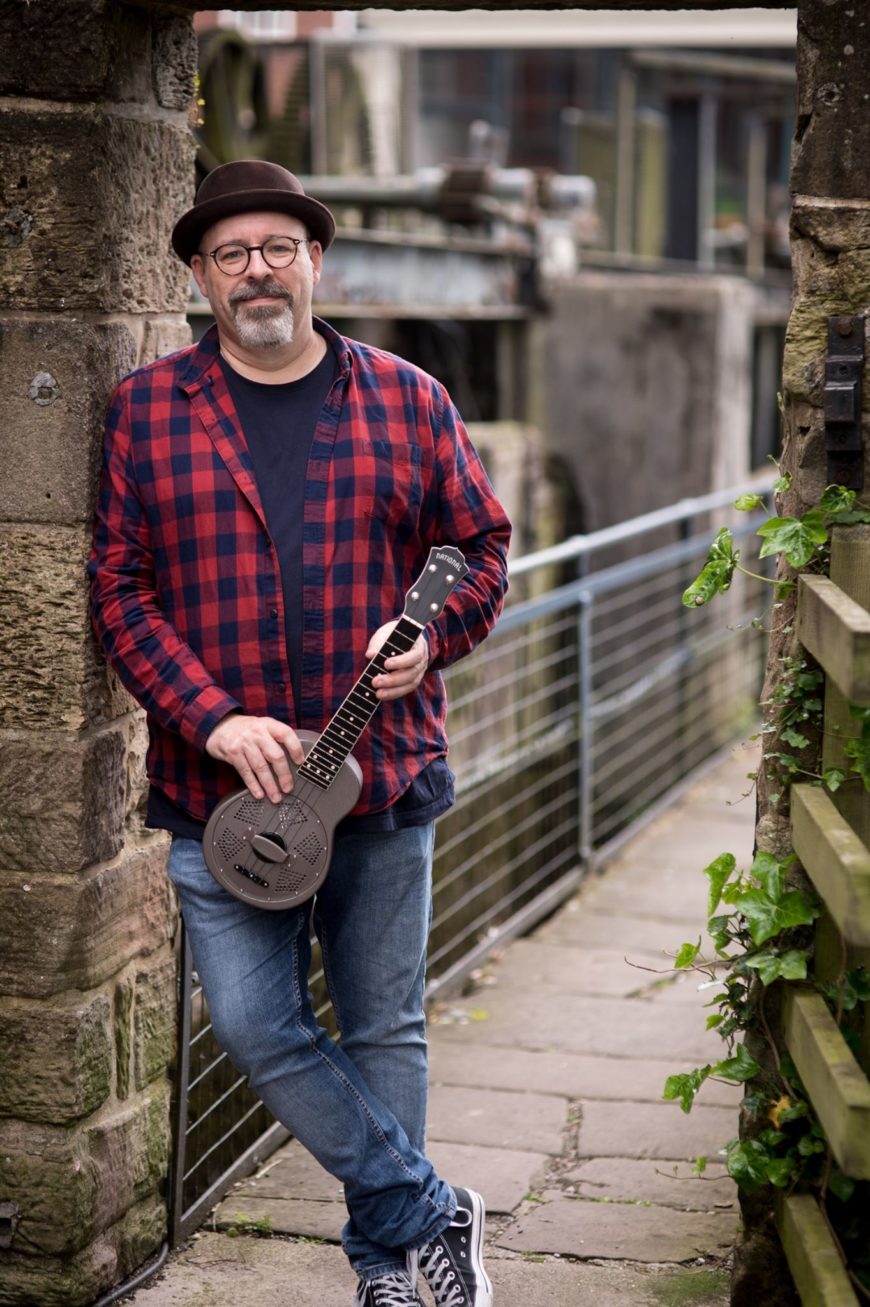 May 18, 2020 by matt In Interviews, Phil Doleman No Comments

One way I’ve been keeping busy throughout these difficult times has been interviewing people from the ukulele world and featuring them here on the Noah Ukuleles blog. I’ve really enjoyed finding out more about lots of very talented performers whom I respect a great deal and this week is no exception.

Next comes someone who really needs no introduction at all – but I’ll do it anyway! Phil Doleman is without doubt one of the most well-known and highly respected ukulele artists in the UK. He’s played at all the major UK ukulele festivals, toured worldwide, performed on the BBC and appeared on over twenty albums! In addition to that, Phil has a range of ukulele workshops which he runs at festivals and uke clubs, and has created, is a regular contributor to Uke Magazine and has written a number of popular ukulele tuition books.

It’s an absolute pleasure to feature Phil on this blog, and here is what he had to say.

I’d like to start by asking about your early musical influences. What kind of stuff were you into and did you play any instruments?

I started to play guitar a bit around the age of 10. My mum plays, and she taught me a few chords. I wasn’t really into music though until the age of 15, when I took up electric bass. About 6 months later I got back into guitar, and was in a band by the age of 17 (though I wasn’t very good!) I ended up playing in a lot of folky bands on the midlands folk club circuit which exposed me to many great musicians, and those influences have definitely stuck with me.

When did you start playing the ukulele? Did you come to it on the well-trodden path from the guitar like many others?!

Absolutely, and initially it was because a uke would fit under my baby daughter’s push chair! I was asked to contribute some live music to her baby music group and quickly found a guitar is not easy to manage when you have all of the baby-related paraphernalia to carry as well. It then became a novel way of adding a new sound to my set, as did the banjo. I realised quickly that the uke was an instrument well worth pursuing in its own right, and I started to pay attention to players like Roy Smeck and Cliff Edwards, and modern players like Jake and James, and of course the Ukulele Orchestra of Great Britain. I was very fortunate that I discovered the uke right at the beginning of the ‘3rd wave’ of popularity.

As someone who’s always loved blues music, I really enjoy seeing how you interpret old Blues songs and are able to re-work them so incredibly well for the banjo and the ukulele. What do you think it is about the ukulele which lends itself to this style of music?

Thank you. I think the uke is perfect for playing any folk forms, music that would have originally been played on whatever instrument people could get hold of. A lot of early 20th century music, blues yes, but also hokum, string band, jug band, etc. featured banjos just as much as the guitar, so I’m not really doing anything new there. The high 4th on the uke does allow for some really nice fingerpicked patterns. It’s also a rhythm machine; there’s just something about the sound, the attack, the limited range that makes it ideal for driving along a song. Historically there haven’t been many blues uke players, though do check out Lewis ‘Rabbit’ Muse, an authentic ukulele bluesman.

I have to say though, having been to a lot of ukulele festivals these past years, sadly I haven’t seen a lot of blues music being performed. Why do you think this might be and what advice would you give to someone who wants to start or even improve their ukulele blues-playing?

I think that the blues is a niche audience, and so is the ukulele, so blues uke is a niche within a niche! You’ll find some great players though, such as Del Rey (buy her ‘Blue Uke’ DVD, there’s no better way to start fingerpicking blues), Manitoba Hal Brolund, and Adam Franklin. I would suggest that anyone wanting to get into blues does a lot of listening (and not just to uke players). Blues is a very broad church, so rather than focussing on one style, listen to as much music from the period as possible, which will include jug bands, country music, early jazz, it all comes from the same roots. It’s often very simple music in terms of how many chords are used, but you’ll start to recognise the way those chords are put together, the little runs that link them, the timing, that’s where the real magic is.

As well as performing, you also do a lot of teaching and run workshops at festivals and for uke clubs. I really loved your series of 2 minute tips on youtube and found these incredibly useful! What teaching are you currently offering and what can a student expect from their lessons?

Thanks, the 2 minute tips videos seemed to really catch people’s interest. My teaching at the moment has three ‘strands’; one-to-one lessons, workshops, and my Patreon lessons. The one-to-one lessons are completely tailored to the students, whatever level or taste in music, so they’ll be able to learn to play music that they enjoy. I have 17 workshops at the moment that I take to clubs and festivals, which are designed to teach specific songs/ techniques/ musical concepts in a 60-90 minute slot, usually to around 30 people. Those I treat very much like a performance, in that they are carefully planned and are hopefully entertaining as well as informative! My Patreon page has a series of themed video lessons (there are around 70 now, but a new one is added every week), and my subscribers can access those lessons as much as they want, replay them, and learn at their own pace without the pressure of me breathing down their neck!

I’ve loved the ragtime guitar greats, like Blind Blake and the Reverend Gary Davis, after being introduced to their music played by the likes of John Renbourn, Stefan Grossman and Ralph McTell. I had composed a couple of pieces in that style a while ago, and with the Coronavirus lockdown clearing my diary, I thought that maybe people might have some time on their hands to learn some new music, and that composing, transcribing and recording the audio examples might keep me busy too. The pieces start off fairly easy and get harder as you progress through the book, and it was really fun trying to bring in those rhythms and melodic twists that I love, and interpret them on the uke. The great thing is that people have already started to send me recordings of themselves playing pieces, which is a real thrill!

This might be a difficult question to answer but… you’ve performed in numerous countries, on TV and radio and I believe had a chart hit – what would you say is the highlight or favourite memory of your musical career so far?

It’s funny, because I have had a real mixture of experiences, from playing to a handful of people in a pub, to a thousand people at a festival or a big theatre, and even on Top of the Pops, but the best bits aren’t always the big gigs. It’s difficult to pick one, but being able to share stages with people like James Hill, Del Rey, Sarah Maisel, Craig Chee, Gerald Ross and Andrew Molina is always a thrill. Right up there must be the time that I played GNUF with Ian Emmerson, on the mainstage, when the brilliant Aaron Keim wandered past us warming up, recognised the song and asked if we wanted a double bass player! He ran off, we went on stage, and in the middle of the set I glanced over to the wings to see Aaron with a borrowed bass. He joined us for two songs, no rehearsals, just musicians listening and communicating. The final gig with Ian as The Re-entrants (our rock ukulele duo that toured from 2007 to 2012) was also very special. Not only was it our final gig, but it was in the big venue in our home town. It really felt like every one of the hundreds of gigs we’d done had lead up to it. My first time teaching at a US festival was also a ‘pinch me’ moment!

How have you been / are you being affected by the current situation with the Coronavirus? Are you making any plans to livestream gigs, workshops during this period of lockdown?

So far, I’m coping pretty well. Fortunately a lot of my teaching is already on Skype/ Zoom, and I can still sell my books and music online. I’ve taken part in a festival, with a pre-recorded set, and lead a workshop over zoom, but I’m still battling with technology to get a livestream where I’m happy with the quality. I’d rather put out videos where I know I can guarantee the quality than struggle with a low quality stream. I’ll get there though! I do miss the interaction with an audience and other musicians, and sadly the timing of the lockdown means that the festival season for 2020 has been wiped out. That’s bad financially of course (after all music is my living), but more than that it’s robbed all of us of the chance to play music together and meet old friends. Musicians are a resilient, creative bunch though, we tend to find a way!

Photo for this article by James Millar