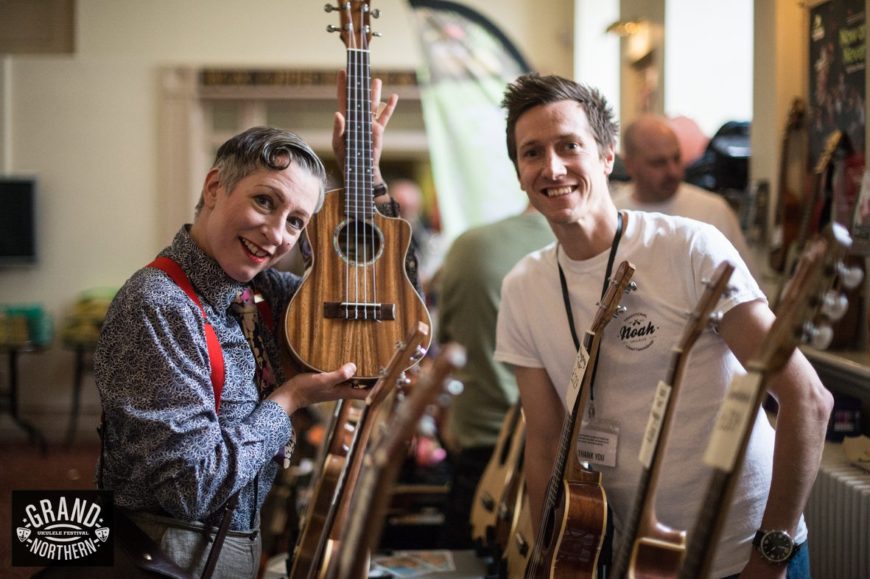 April 25, 2020 by matt In Interviews, Tricity Vogue No Comments

To keep myself busy, and hopefully provide a bit of support / coverage for musicians during these difficult times, I’m trying to interview various people from the ukulele world and feature them on the Noah Ukuleles blog.

Next up, I’m delighted to feature Tricity Vogue. Tricity is an incredibly talented performer, a fantastic singer, and has been a well-known and well-loved part of the UK cabaret scene for many years. Lots of you will no doubt have had the pleasure of seeing her perform at Ukulele festivals around the UK, including GNUF where she has been the host of the Late Night Cabaret Stage. Here’s what Tricity had to say:

You mention on your website that you took up the ukulele in 2007. Prior to that, did you play any other instruments and what experience had you already gained of performing live?

I played guitar as a teenager. Joan Baez was my role model. I wrote songs and sang them in my bedroom, but never ventured in front of an audience. I started performing as a jazz singer in Sri Lanka in 1993, after being ‘talent spotted’ in a karaoke bar. I learned my jazz standards from the premier musicians on Sri Lanka’s thriving jazz scene, who took me under their wing. I was the ‘girl singer’ in many jazz bands in Sri Lanka, Glasgow, and Nottingham, before creating the fantasy alter-ego of Tricity Vogue in 2004 after I first moved to London.

What then prompted you to start playing the ukulele and how difficult was it to incorporate it into the lounge jazz style of music which you were playing?

I was offered a gig at Cheese and Crackers Cabaret on the Battersea Barge, co-hosted by Paul L Martin (AKA Paulus, of BBC1’s Come Together) and Sarah-Louise Young (who starred in my drag action musical Heels of Glory as the villainess many years later). Neither the pianist nor the guitarist in my band (“The Tricity Vogue Slinktet”) were available, but my singing partner Lana had a car boot full of ukuleles, as she taught toddlers how to play at a group called “uke can do it” in North London. She suggested we say the band had stood us up, and play my song “Big Band Blues” on ukulele. The line about being stood up by my band was one I’d used before – and I’d written the song “Big Band Blues” inspired by my alter-ego’s fictional romantic disasters. It was strange being taught to play my own song on a completely new instrument. Sort of like a guitar, but different. I had a lot of hangups about being a singer but not a ‘proper’ musician, even though I wrote songs, and I found standing on stage accompanying myself instead of being dependent upon an accompanist extremely liberating. Musically, it massively expanded my horizons as a songwriter. I didn’t need to incorporate ukulele into the lounge jazz style of my band for long. In a case of life imitating art, my then boyfriend, the bassist in the band, broke up with me, and two of my other bandmates left to have babies, so the band split around the same time as I started getting invited to perform solo on ukulele. I was singing a song about getting dumped by my band, but in a way it was the other way around.

Did the ukulele also have an impact on you as a songwriter and not just as a performer?

The ukulele completely set me on fire again as a songwriter. I hadn’t written many songs since I was a teenager, but they were coming out of my ears when I started learning ukulele.

Your Ukulele Cabaret went on to become a very successful show at the Edinburgh Fringe. How did ‘Tricity’s Ukulele Cabaret’ initially come about and what was it like to perform at such an iconic festival?

Ukulele Cabaret has been running monthly in London at the Lincoln Lounge pub in Kings Cross since 2007. It started out as a one-off and just didn’t stop. There was a time when it went absolutely insane – packed to the doors every month – and then I took it to the Edinburgh Fringe in 2010 and it was madly popular there too. We put an Edinburgh twist on it by turning it into a competition, and calling it the Uke of Edinburgh Awards. I wore a ukulele on my head, and the winner would play my head at the end of the show. It’s quite a strange feeling, but delightful. Phil Jupitus played my head once, behind a hedge, in a weirdly private moment. I was flyering, and he was about to go on and do his Fringe show, and it turns out he can play ukulele. He gave my head a strum, and said “It’s out of tune, let me tune it for you.” And he did.

What’s it like performing at Edinburgh? Boot camp. It’s exhausting, and you can’t afford to take your eye off the ball for a moment. If one day you’re feeling too tired to flyer, or don’t put in a sparkling cameo on that guest spot you get on someone else’s show, you have a tiny audience at your own show, and you feel like you’ve failed. Next day you could get a full house and feel like you’re smashing it again. I did five years of shows at Edinburgh – my own solo shows and Ukulele Cabaret – and I went from rock bottom to feeling like I’d cracked it, and back and forth again and again, several times over those five years. The Edinburgh Fringe takes over your whole year, and in the end I decided to step off the merry-go-round and have a rest. Meeting my husband might have had something to do with that.

Another hugely successful part of what you do is the ‘Tricity Vogue All Girl Swing Band’ who lit up the Grand Northern Ukulele Festival in 2014 and have performed at the Royal Albert Hall. This is obviously very different from a lot of your other musical projects where you are a solo performer. How does performing in a large group like this compare to your work as a solo performer?

I’ve come full circle, back to where I began, with a jazz band, but this time, instead of being the “girl singer” I’m the band leader, and I’m a musician as well as a vocalist. I’m still not half the musician that the rest of my band mates are, but I’ve learned enough to be able to speak the same musical language. It’s also a great journey to go from being “girl singer” in a band of male musicians to fronting an all-female line-up of musicians. I’ve enjoyed smashing some gender role assumptions (my own as well as other people’s) along the way. I don’t feel like being in a band is a departure from what I do as a solo performer – I feel like it’s at the heart of what I do as a musician. It’s the ultimate aspiration for me as a musician and a singer, to perform as part of a tight-knit band, with a strong, coherent sound and identity. When a group of people make music together – really together – the band is more than the sum of its parts. There’s no feeling like it in the world.

As well as your vast experience as a performer, you have also been teaching the ukulele for some years now. What advice would you give to someone in terms of learning the instrument with a view to then performing in front of an audience?

If you want to perform, then get on stage and perform straight away. Don’t wait until you’re “good enough”. I learnt an incredibly powerful lesson when I started performing solo on the ukulele, as a fledgling player. I discovered that audiences fell in love with my vulnerability, and it was the missing piece of the puzzle for learning how to win over a crowd. So much so, that I had to work hard to find other ways to show them my vulnerability once I got good at playing the ukulele. There are lots of other useful tips to give about performing, but in the end nothing beats stage time. Just get loads of it.

How have you been / are you being affected by the current situation with the coronavirus? Are you making any plans to livestream gigs, workshops, offer online teaching, etc?

Ukulele Cabaret went online via Zoom for the first time on 14 April, and we’re planning to go live online via Zoom on the second Tuesday of every month, hosted by the Pandemic Pluckers.

I’m going to be appearing at the World of Uke’s Wireless Festival #2 from 1 May and I’m also going to record a cameo for Tara Maysey of the London Ukulele Project, on her charity ukulele single “A Little Help from my Friends”.

I’ve also done a fair bit of ukulele teaching via Zoom now. It’s very different to teaching people live in the room, but it has advantages as well as disadvantages. One advantage for the student is that the teacher can’t actually hear what you’re playing, as it’s not possible to play at the same time without muting all but the song leader, because of the lag. There’s a lot to be said for the freedom to experiment that a student experiences when they realise they can’t be heard by anyone else.

I have had a lot of gigs cancelled or postponed, including some very prestigious band gigs. It has left me without much of an income stream, but then again our outgoings are very low in our little cottage in the countryside, so we’ll get by. Priorities change at times like this. We’re happy to be able to be together, and have a garden and space around us. I just want my family and friends to stay safe and well, and that will be more than enough to keep me happy.

Tricity will be appearing on the World of Uke’s ‘Wireless Ukulele Festival #2’ on May 1st. The first one was a huge success and now it’s back with another fantastic lineup. For more details, click here.