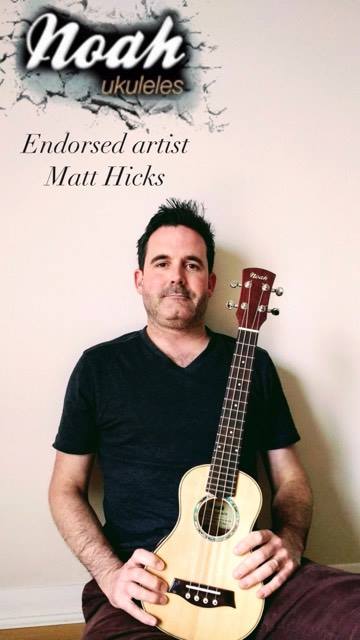 One of the perks of being a fairly regular exhibitor at ukulele festivals is getting to see some very talented musicians at close-hand – and while at the first Ukulele Festival of Wales last summer, I had the pleasure of meeting and listening to Matt Hicks try out some of my ukes. I was immediately impressed and with Matt being currently based nearby to Noah Ukuleles HQ, we talked about meeting up at some point. With both of us having fairly busy schedules that took quite a while to arrange – but I’m delighted to say that after chatting recently, Matt has now become an official Noah Ukuleles endorsee. He’s currently doing some recordings with both the Noah Campanella and Baritone models, and will also be doing some more in the future with my electro models. I think Matt’s talent as a musician and a songwriter is clear for all to see, but what I also really liked from talking to him was his passion for music, and the ukulele in particular as a tool for songwriting, and it was great to hear about his involvement in the Original Ukulele Songs Platform. I particularly enjoyed reading a guest blog which he wrote last year for the Original Ukulele Songs website on the challenges of writing songs on the ukuleles – read it here.

Matt will be performing at GNUF this year and in the meantime, check out his you tube page here.

Here’s what Matt had to say about becoming a Noah Ukuleles endorsee:

” I am incredibly humbled and touched to have my music endorsed by Noah Ukuleles. I am passionate about songwriting and immersing myself in communities that put their faith in the universal language of music and poetry to build bridges.

The world of ukuleles is a unique place where there is thin, faint line between passion for music and industry. There are an increasing number of ukulele manufacturers who do what they do through love of music over business and Noah Ukuleles for me epitomises this in many ways. Noah Ukuleles are handmade in the same workshop by a small team under one expert luthier in Vietnam. Noah ensures that his luthier get an appropriate financial return whilst providing the player with a pure handcrafted instrument. I have been privileged to have road tested many of their ukes and I am increasingly impressed with the instruments they make abut also their willingness to listen to the ukulele player about what they want.

What counts most in an instrument for me is that I have a ukulele that is technically excellent but is unique enough for the player to build an individual musical relationship with it. I need a uke that sings whilst I compose on it but stands the test of being on stage belting out songs I’ve written. I look forward to exploring this relationship with Noah Ukuleles “.  Matt Hicks | March 2017