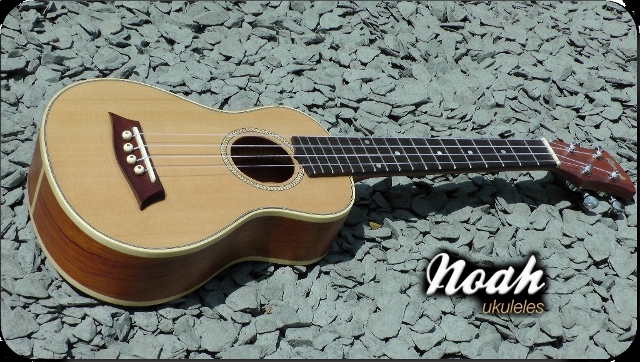 At the start of 2014, I decided that it was time to add a new model to the Noah range and thought that it would be nice to canvass some opinion from ukulele enthusiasts on possible designs. Tim Morrison, who you may have seen playing some lovely pieces on his Noah Monkeypod Concert, did a great job in convincing me on the merits of a Super Concert model – a ukulele with a concert-sized body, but a tenor scale neck. This allows for extra fret access but helps to retain the beautiful chiming tone that a concert-sized body brings.

After that it was a case of deciding on woods and other design features. We eventually decided on solid mahogany for the back and sides and sitka spruce for the top. As an extra feature, we added a pin-bridge – something you don’t often see on a ukulele!

Only a limited number have been made so if you are interested in owning one then please contact matt@noahukuleles.com . The Noah Campanella retails at £229 and comes with a soft padded case.