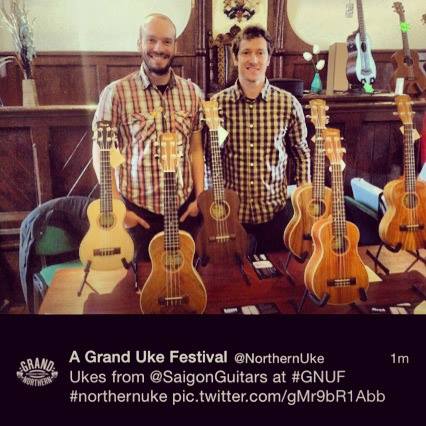 November 22, 2013 by admin In Uncategorized No Comments

After a successful and very enjoyable time at the GB Ukulele Festival in Cheltenham earlier this year, I had high hopes for the inaugural Grand Northern Ukulele Festival – and I wasn’t disappointed!

The weekend had begun with a gruelling 6 hour drive from Brighton up to Penistone, where we were staying with family for the weekend. After a much-needed good night’s sleep, myself and my assistant / photographer Rich set off for Pontefract. We arrived a bit late due a sentimental detour through the charming little town of Cudworth which enabled Rich to see a small slice of his family heritage!

After arriving, we set up our stall inbetween the good people at Bonsai Guitars and Eagle Music. Keef from Bonsai kept us entertained thoughout the weekend with some virtuoso ukulele-playing, which at one point had him turning his hand at a bit of slide-ukulele!

Throughout the day it was nice to see some familiar faces from the Cheltenham festival, while also great to get to meet some more fellow ukulele enthusiasts! The response to our Noah Ukuleles was fantastic with many punters complementing them on both their appearance and tone. Our Monkey Pod concert proved to be the biggest hit and I thought at one point that I was going to be regretting not bringing more with me!
Once the day was over we made the short trip back to Penistone. To reward ourselves for our efforts at the festival, we shelled out on some fish n chips at the local chippy, who kindly threw in a complimentary ‘bag of scraps’. Being a pair of southerners, this mystery extra did confuse us slightly though we are now making it our business so spread the word down south on the wonders of ‘scraps’! We then made our way to the pub, chatted to the locals who were all very friendly and welcoming, though didn’t seem to believe us when we said we had come to Penistone for a ukulele festival!

Day 2 at the festival was another cracker filled with yet more amazing performances. The day had begun with what seemed like a more mellow atmosphere which I think owed as much to there being a lot of hungover people in the room than anything else. However, it didn’t last and before long the crowds and buzz of the previous day returned. Once again, it was lovely to meet so many friendly, interesting people and also introduce them to our Noah ukuleles. On that note, I was lucky enough to speak to Baz Maz, the man behind the awesome got a ukulele website, and he has kindly offered to review both our Mahogany Series and our Monkey Pod series in the coming weeks – watch this space!

So overall, a great time was had and top marks to the organisers for putting on such an incredible festival – I look forward to returning next year!