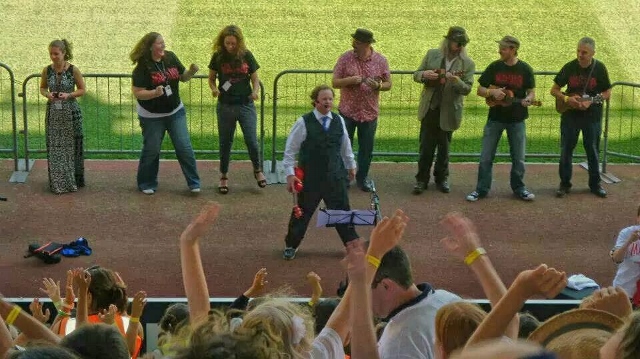 Have you ever wondered what over 2300 people playing ukulele at the same time would sound like? Well, here at Noah Ukuleles, we now know!

We had a fantastic day out at this event which took place at St Mary’s Stadium, the home of Southampton Football Club. It was great to see so many ukulele enthusiasts, of all ages and abilities. Once again the reaction to our instruments was overwhelmingly positive and it was great to see some familiar faces as well as some new ones visiting our stall! People were impressed with our new range of electro-ukuleles, and particularly taken with the cutaway models which are available in both concert and tenor sizes.

Hampshire Music Hub have since said that they counted 2370 people through the turnstiles which would make for a new world record, though it could take up to 6 weeks to get confirmation from Guinness of the record. So, all in all, a very successful day – apart from having to explain to my son Noah when I arrived home that I didn’t manage to get a photo with Mr Tumble!